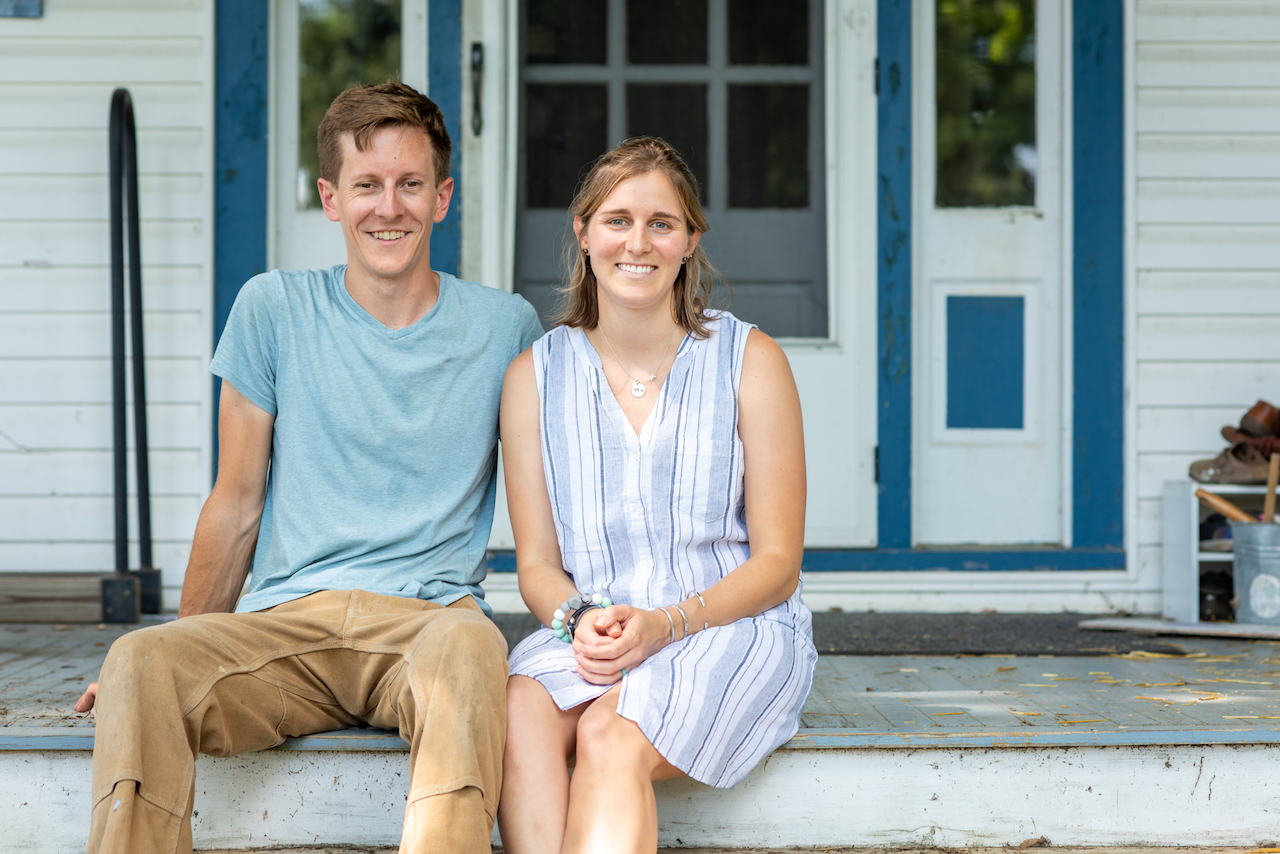 Since starting a pastured meats business with his dad three years ago, Jackson Webb has learned plenty about licenses, lawns and how chickens think.

“This one,” he says of a laying hen that’s making a ruckus at his feet during a tour of his Swamp Fox Farm in Valley Lee, Md., “she’ll come up and yell at you until you pick her up.”

Webb picks up the nameless, red-feathered bird and, before he knows it, is giving a quick lesson on chicken anatomy. He can tell she’s just eaten by the feel of her full crop, where she begins digesting food before it to the gizzard and intestine, he explains.

A world history teacher at St. Mary’s Ryken High School, Webb, 26, can’t help but give lessons on the birds and farm business that have been his research subject for the past three years.

“It’s definitely something you have to learn, and I don’t think it’s for everyone,” Webb says of raising chickens for meat and eggs. “But we’re getting better and better at it every year.”

The farm that Webb owns with his father, Chuck, started with a few chickens, a field and a desire to know more about the source of their food. The family farm has since added laying hens and ducks for eggs as well as nine “normal pink pigs,” as Webb calls them, that are destined for pork. 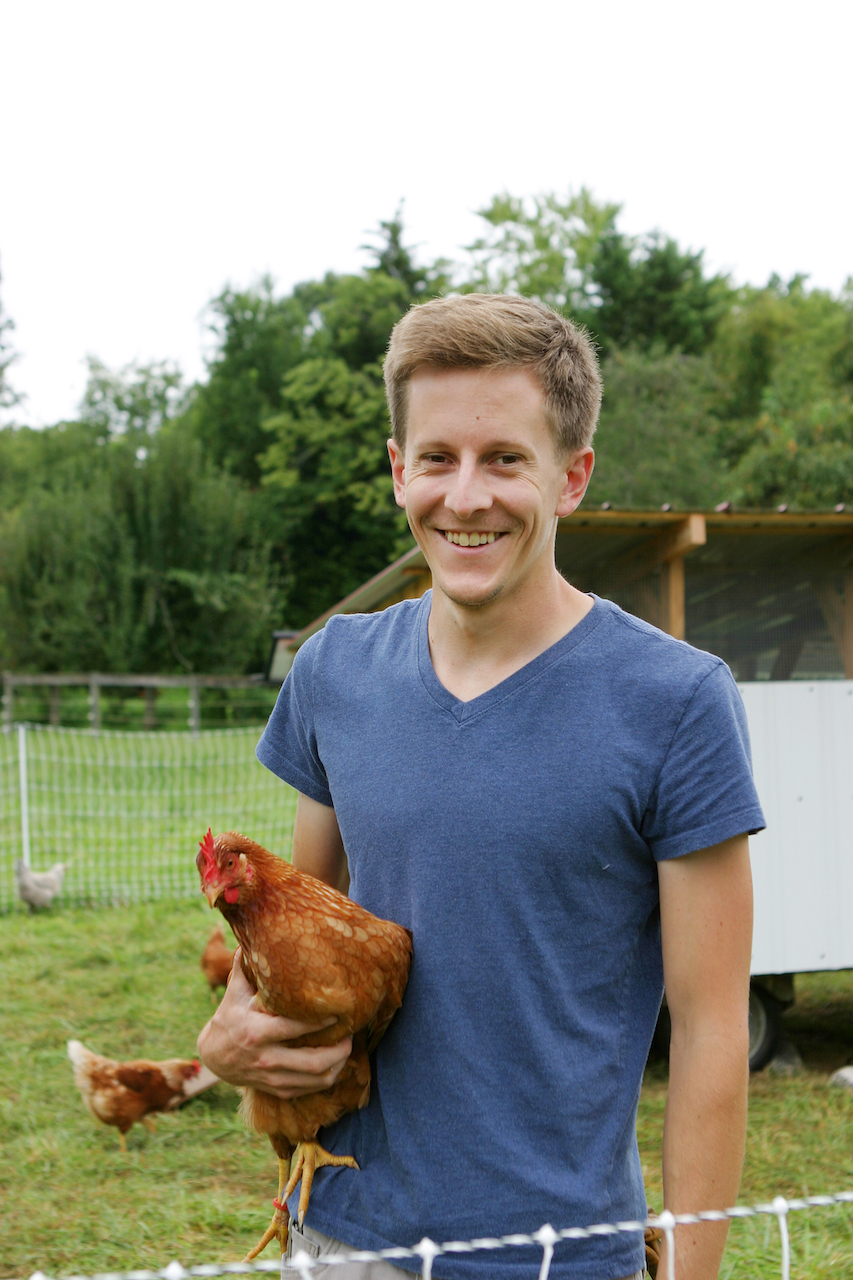 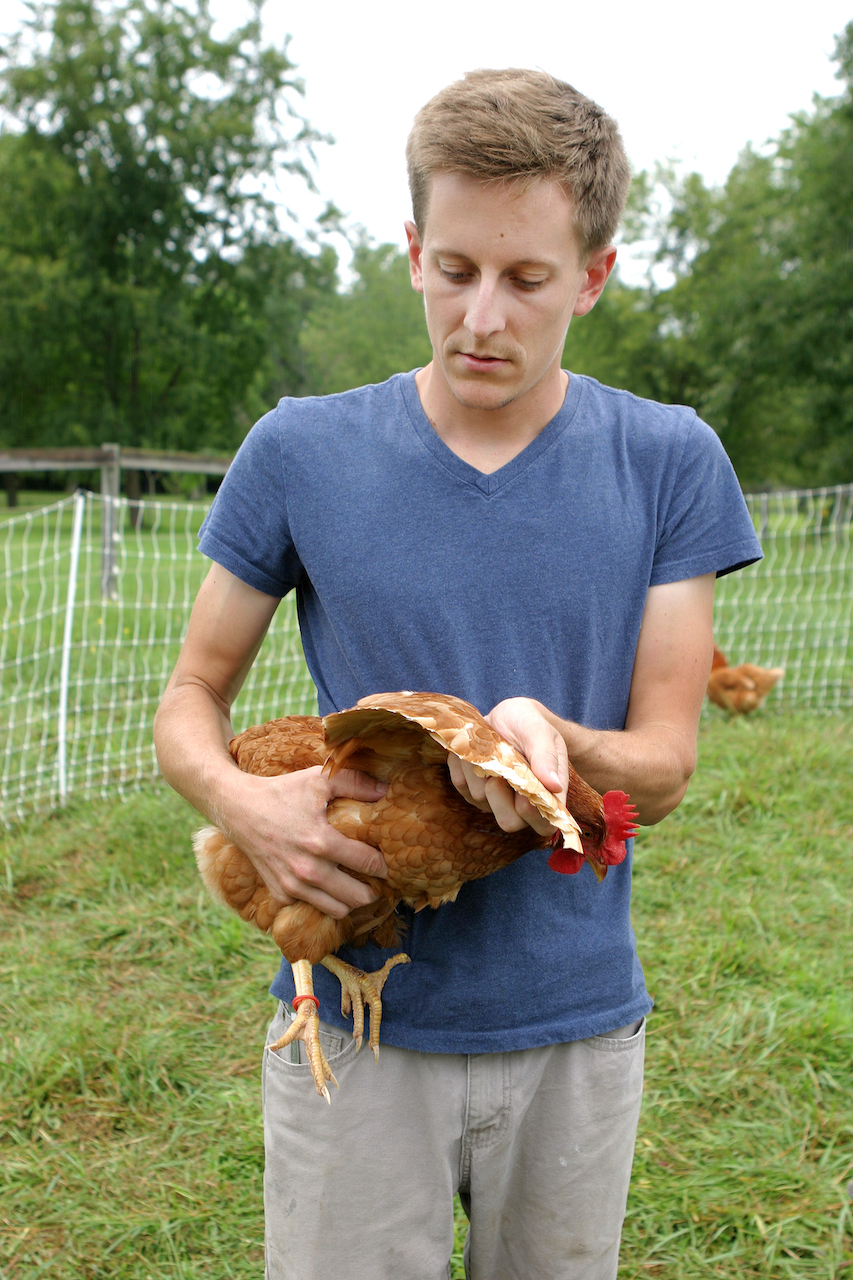 The Webbs first moved from California to St. Mary’s County with Chuck’s Naval career as a helicopter pilot. A few years later, as Jackson and his sister, Madison, were finishing high school, the family decided to put down roots in St. Mary’s County, buying a “fixer upper” on seven acres.

Then, when Navy friends who had been mowing four acres of hayfield next to their property for the St. George’s Episcopal Church got orders to California, they asked the Webbs to manage that, too.

Chickens in a row

Now, 240 kosher kings (or the speckled cockerel) chickens, their cages arranged in a diagonal line, like chess pieces across the field, are fertilizing the church’s hayfield.

“We move them once a day onto fresh forage. I can show you,” Webb says, grabbing a metal dolly made to slide under the edge of the wooden frames.

He lifts the edge just slightly and effortlessly scoots the cage across the field until he’s standing where the chickens were. Webb adds that the first cages they made out of four-by-fours were too heavy and worked for a couple days, he says, “until my trapezius muscles were blown to shreds.”

These are made with lighter materials and their lids are secured with zip ties — the result of another lesson learned. Jackson has worked to make this operation as autonomous as possible, since he is not able to be on the farm 24/7 once school starts again. Apparently, he says, weasels can unfasten the metal hook-and-eyes when chicken strips are on the other side.

Webb doesn’t blame them. He hears from customers often that his chickens taste better than the store-bought variety, yielding more dark meat and better flavor. As a history teacher, he’s gone to great lengths to select breeds that have a genetic history of turning forage into high quality meat and superior flavor.

“You don’t have to add anything but salt and pepper,” he says.

After studying anthropology at St. Mary’s College of Maryland, Webb got into food after an eye-opening summer in Africa.

“I hadn’t really asked questions about food before I went. Everyone was saying, ‘You’re going to have a hard time with their food and water. But the week I got back here, I thought I was going to keel over from our food.”

“I hadn’t really asked questions about food before I went,” says Webb, who did a stint with AmeriCorps after graduating college in 2011. “Everyone was saying, ‘You’re going to have a hard time with their food and water. But the week I got back here, I thought I was going to keel over from our food.”

Learning on the fly

Besides being a student of trial and error, Webb says he and his dad have gotten most of their cues from reading books and websites about raising pastured meats — and by reaching out to yet another Navy family.

The Maryland FarmLINK Mentor Match Program introduced them last year to David Paulk, who, like many in this area near Naval Air Station Patuxent River, served in the Navy before starting Sassafras Creek Farm.

“He helped me make sure I had everything straight to come to market,” says Webb, who was overwhelmed at first by the paperwork and licenses required to sell meat directly to customers.

He now sells all his products through that Saturday farmers market and has “enough regulars to keep us happy, to make us feel like we’re doing something.”

Having the Paulks as mentors helped him realize he could go to market and make a successful business out of growing birds.

“They weren’t born farmers, either,” Webb says, “Dave (Paulk) basically said, ‘If it’s something you want to do, you can do it.’”

The confidence boost was vital for Webb, who doesn’t know anyone else raising pastured poultry in his area. What he lacks in competition he also lacks in networking opportunities with likeminded farmers, but he’s figured out plenty on his own. 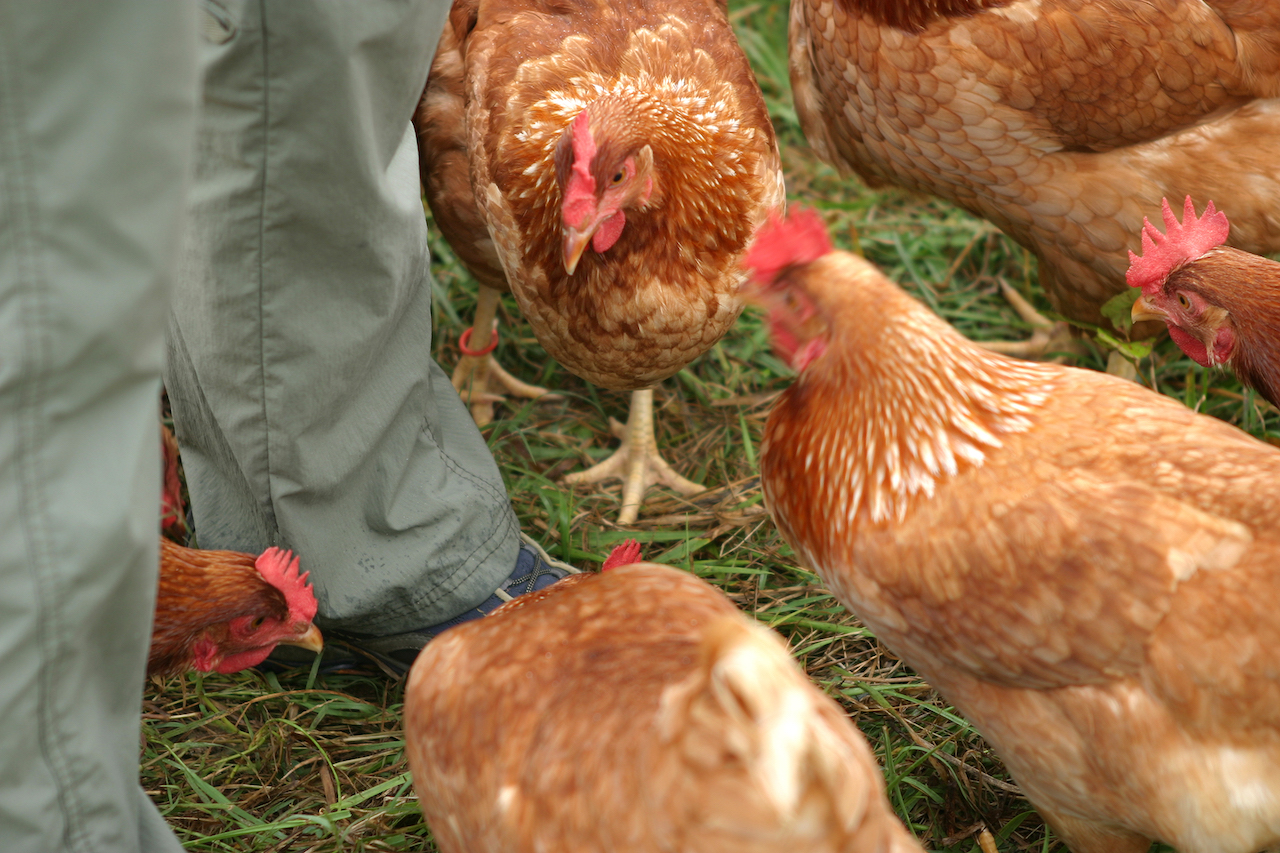 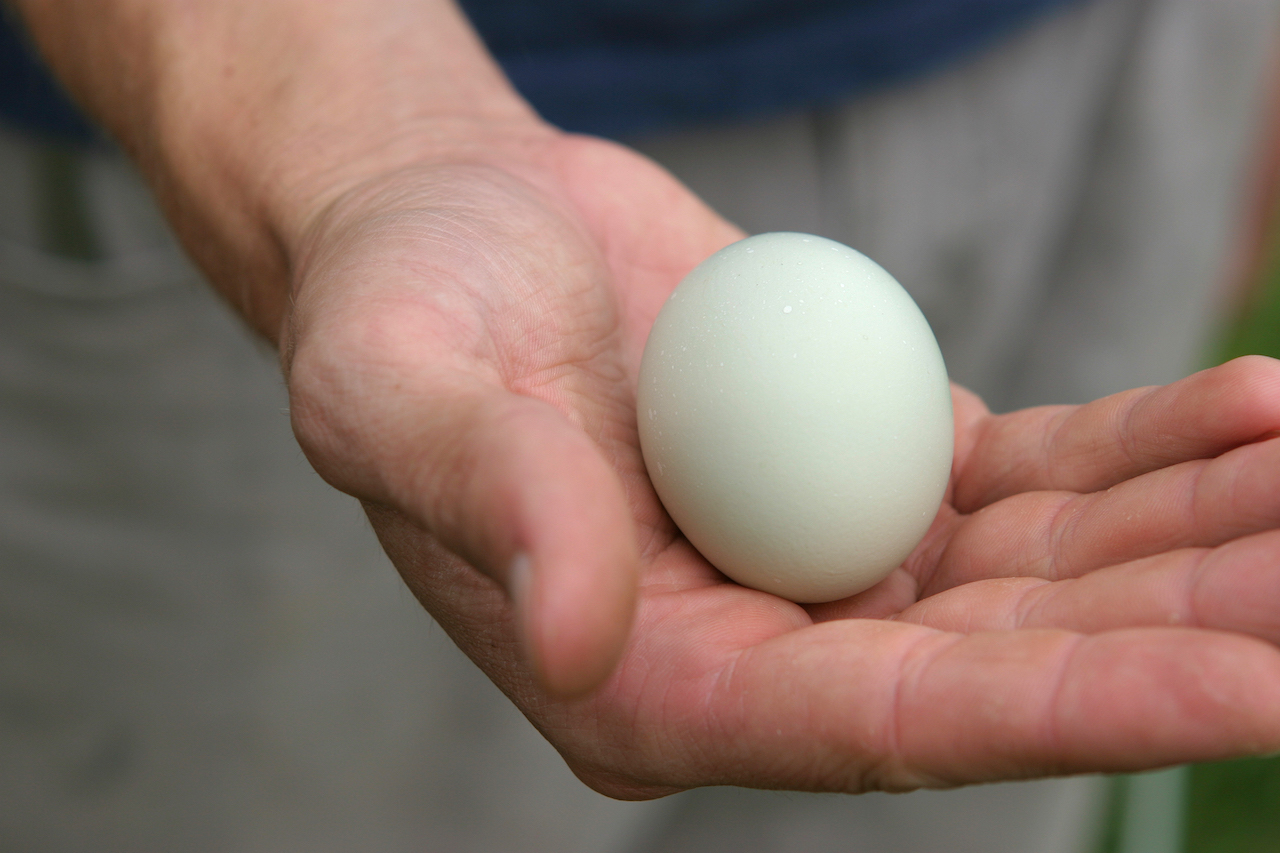 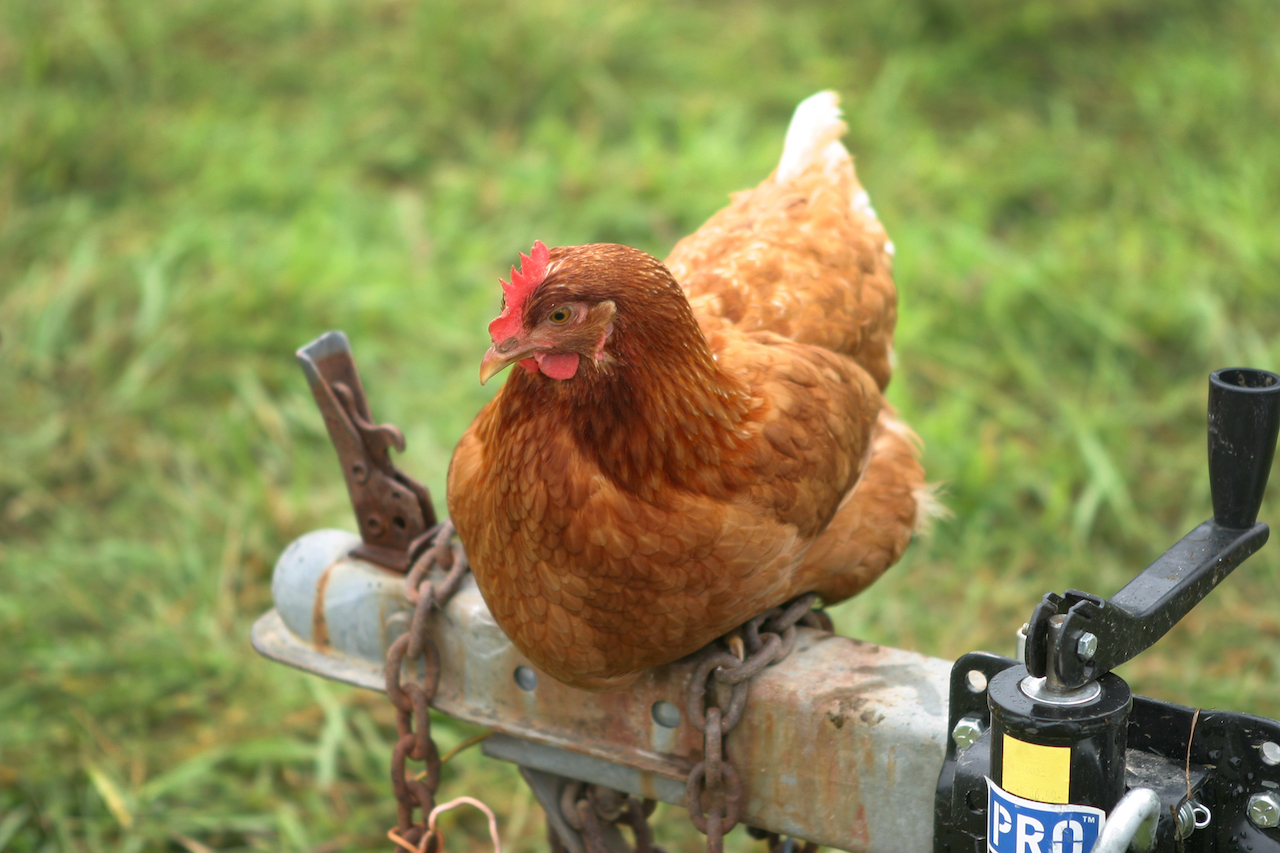 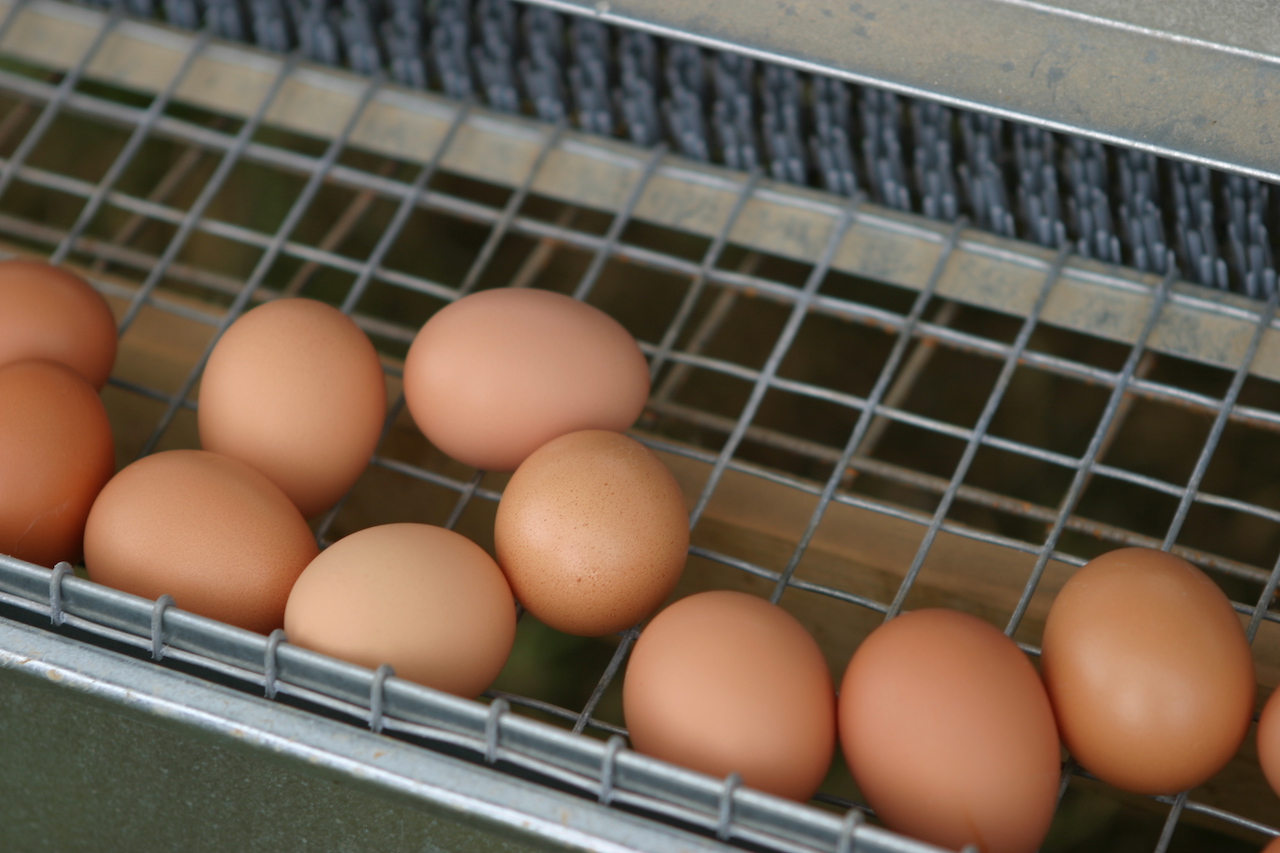 Webb says he also couldn’t do this business without the support of the church that leases Swamp Fox Farm the land his chickens are currently fertilizing, leaving it greener than they found it.

He walks across a dirt driveway from the church’s land to his family’s, where about 80 hens curiously cluck their way toward him inside a portable fence. The coop he built sits near in the center of the field in a narrow run to keep hawks from snagging “the ladies;” a rooster strutting nearby helps with that, too.

Webb borrowed ideas from the chicken industry, farmer-authors like Joel Salatin and Forrest Pritchard and “a guy from Australia,” in constructing the coop and other aspects of the farm.

On days when they process the chickens, on-site with state and federal permits, this breed of farming feels like full-time work. On other days, he or his dad move the chickens in the morning and are off to full-time jobs elsewhere. His dad still works on base and Webb stays busy at the school where he met his fiancée, Hattie Schiavone.

The two plan to marry next summer and continue their lives as teacher-farmers for as long as possible.

“I like teaching and I like farming. If I can keep doing both I will. If I have to make a choice one day,” Webb says, pausing. “I’ll cross that bridge when I get to it.” 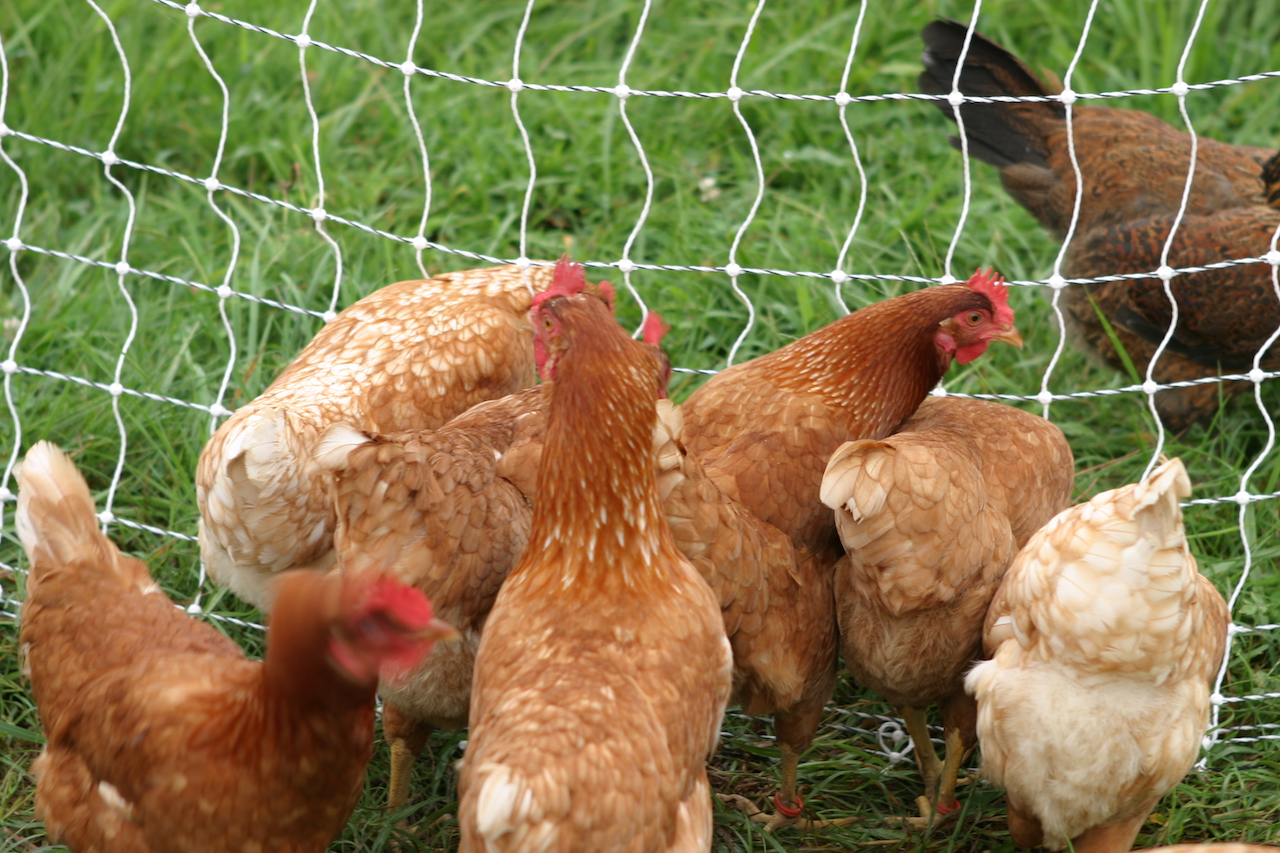